As an IT student and graffiti artist, it didn't take long for me to grasp the fascination of the digital transformation of art and in 2009 I began to create illustrations, designs and layouts on my computer. Soon I was engaged to realize visuals on parties. I learned to animate a show live and to mix videos and pictures with the software Modul8. I experimented a lot and developed a feeling for creating a certain ambience or underline music with visuals. At that time, I attended professional school, where I met Florian. We quickly began to develop a friendship and started doing projects together. That’s how Bildspur was born in 2016. On the next pages you will get an insight into some of my work at Bildspur.

The workspace for communication “bildspur” creates immersive experiences from the combination of design and technology. We develop and build installations from scratch. 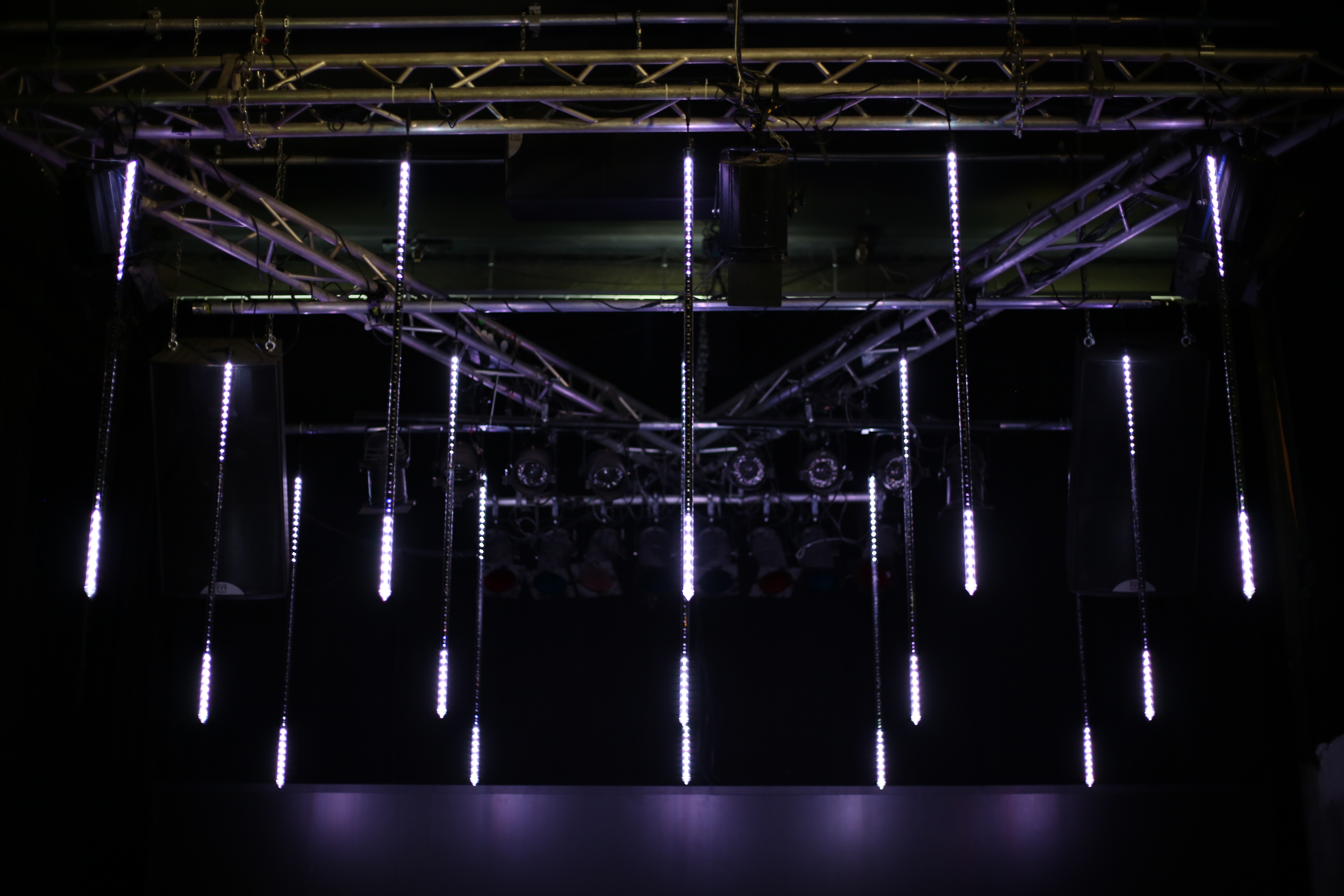 This project is an interactive installation that takes the visitor to a dream world of colourful light and sound. The led forest let you experience and manipulate the scene, only with the movement of your hands. The grid of LED tubes projects the position and movement of your hands in the 3D space. It is controlled by moving the hands above a sensor. If you move your hands up or down the light in the grid is also moving up and down,, depending on the angle of your hands the colours change and if you make a fist it turns white. When nobody is controlling, a pattern animation starts that remembers the last colour of every LED. The idea was developed for the Kleinlaut festival 2016. In 2017 I developed an new interaction concept with the glowing cube on the socket as a guide for the users. For the realization I worked together with Kyra Rychner, an IAD student, at ZHDK.

Sam, one of the creators of the Honeybadger event series, approached us with the request to create a visual show around a party with the headliner monkey safari. They already planned to build a “jeep” frame around the dj set. I had the idea to create a 3D world and project it behind the jeep to make it look like the jeep is driving towards the crowd. We decided to create 5 scenes that the jeep will drive through. I designed the 3D models of the animals and plants in Cinema 4D and Florian created the environments. We then put everything together and animated it. We also mapped the jeep itself and enlightened it with an additional projector to make the installation even more immersive.

about the client: Honeybadger is an event series of electronic dance music parties, they are known for creative stage design with lots of decorations. 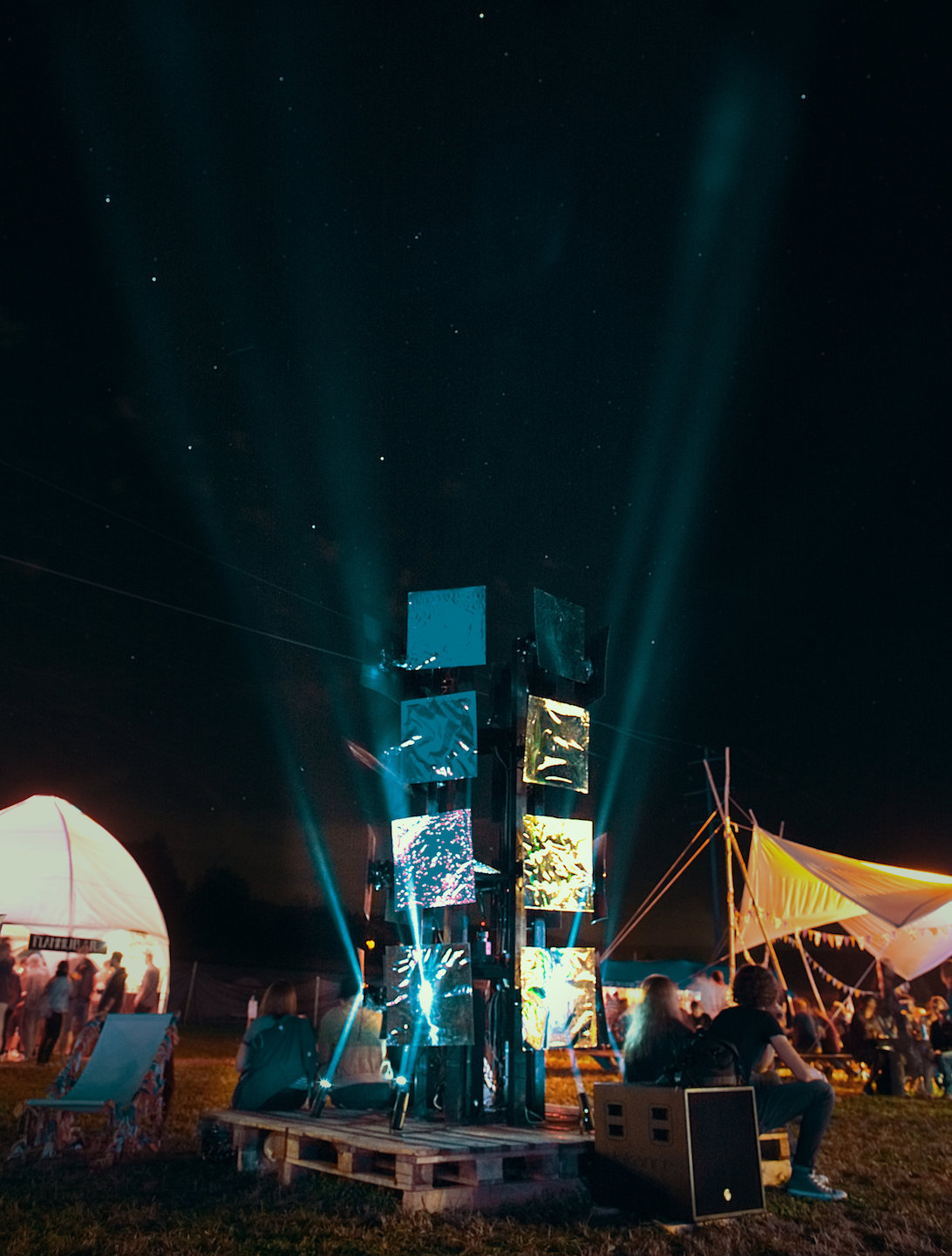 Beauty lies in the eye of the beholder. However, each perspective forms and changes it, up to the point where the surroundings are reflected by the subject. The interactive installation FLØJE tries to make this process tangible und invites the viewer to form, change and observe it. This piece of art was designed for and displayed at the Kleinlaut Festival 2017 in Brugg. Together with Florian we created several prototypes until we developed our final concept. During realization, Florian took care of the electronics and I created the 2D parts for the case in Affinity Designer and cut them out with a laser cutter. I also maintained the project time schedule, organized a team of helpers and managed the assembly of all the parts.

About Kleinlaut Festival “The association kleinLaut evolved from the desire to expand the cultural landscape of the Brugg region with a music festival. We are a small (and sometimes loud) team that sees the enthusiasm for music, culture and social gatherings as the foundation for our festival.”

My passion are light and video-installations, where i get hands on or manage projects. In my daily life i'm a support analyst for web- and mobile applications, where i'm the person between the business world and software development.